Modernized JavaScript 90's Cursor Effects, that we all know and love

Bringing those beloved cursor effects into the modern age.

These Cursor Effects have been sitting in my GitHub profile for a fair while now, and much like the cursor effects of the ’90s were a little old and decrepit, so I decided now’s the time to modernize them a whole lot! 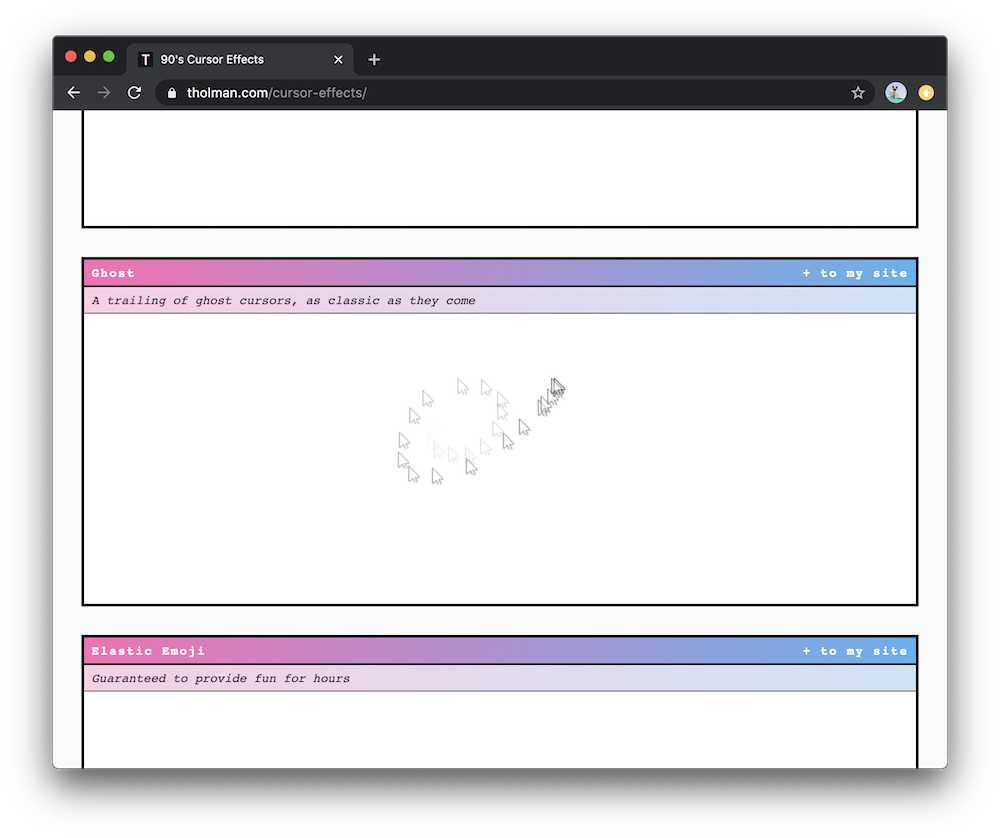 These range from the character-based fairy dust. 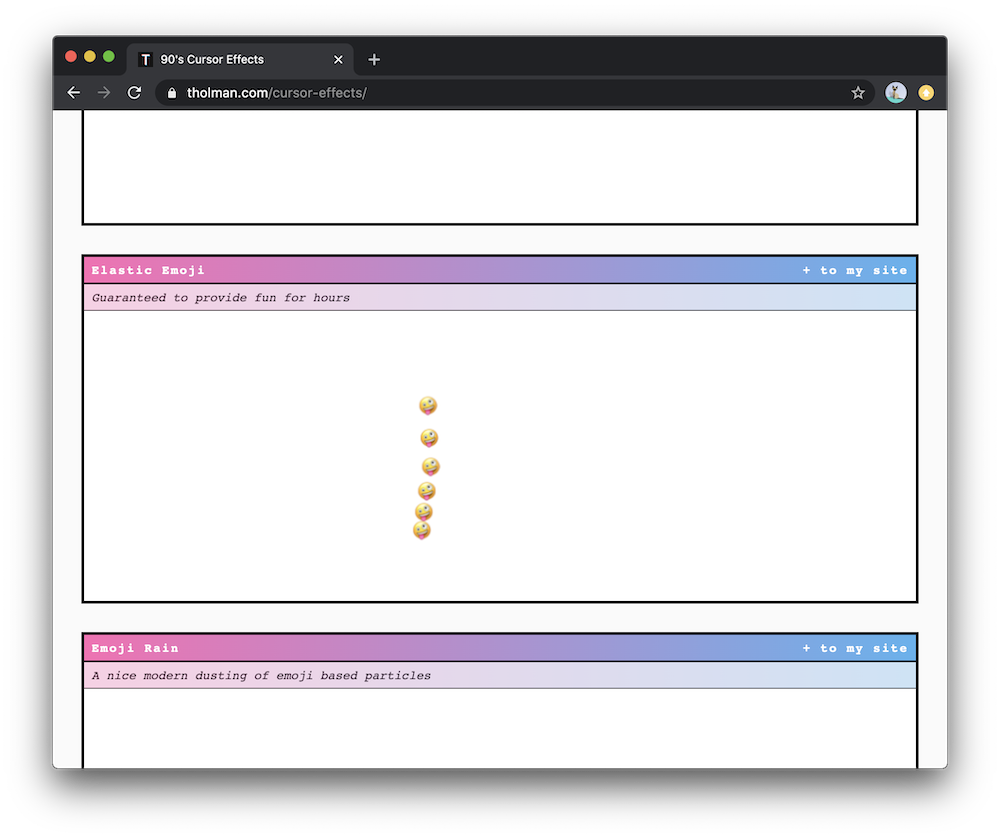 Right through to the beloved snowflakes, and ghost cursors. 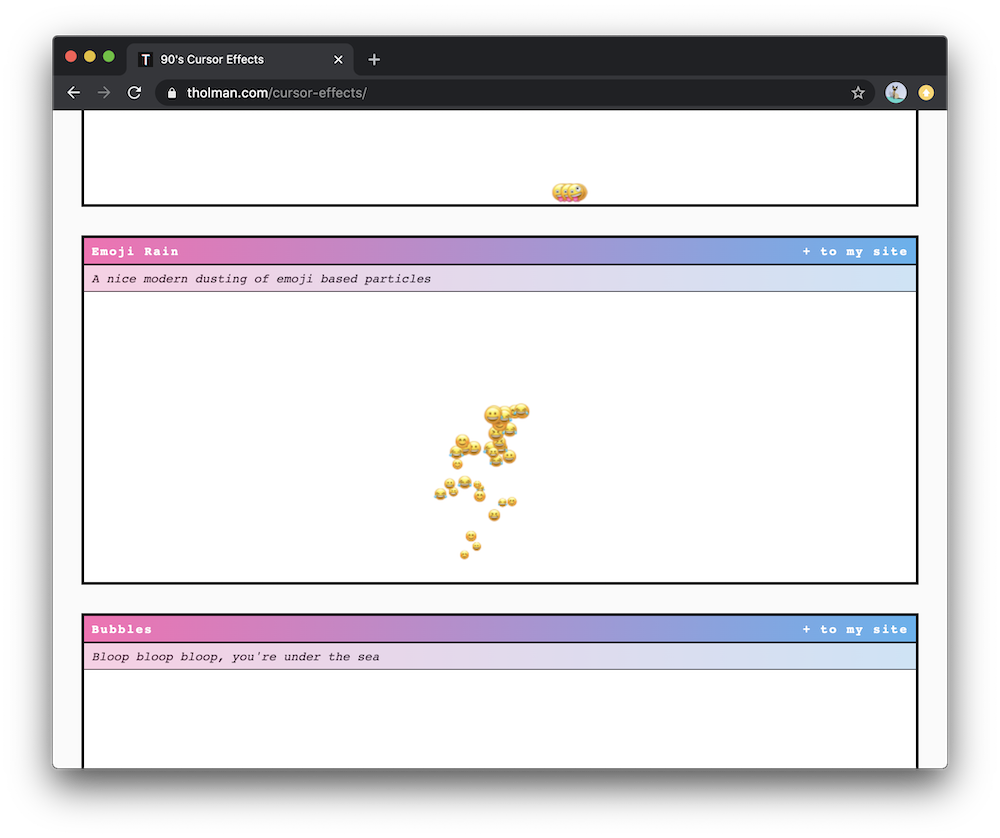 Each of these is built with modern JS in mind, so they’re super speedy and very customizable… you can have them sit over the whole screen, or sit within smaller windows.

Super free to use, which is the icing on the cake I guess! If you’ve seen any other old effects floating across the web, I’d love to bring them into this library, if anything for the preservation of a beautiful time on the internet.

A 10 minute talk about the making of a mosquito.

Making the mosquito was one thing, though after it’s creation it didn’t feel quite right leaving the project alone.

That’s when the amazing !!Con came along. Bang Bang Con is one of my favorite conferences each year, focusing on small bite-sized projects and often showcasing people being super creative within speedy 10-minute talks. And they were interested in my mosquito!

If you enjoyed that, I definitely recommend watching some of the other talks of the two-day conference, both are available via their recorded livestreams.

What’s next for the mosquito? Only time will tell.

Back in 2012, I built The Useless Web, a portal to the weird of the internet. Now, I’m tracking down how those sites came to exist.

When The Useless Web was built, honestly, I was on a broad search for everyone all sorts of weird sites here and there, but didn’t put a whole lot of research into them… they exist, people all over the world have been spending time creating all sorts of useless wonders. Now, I’m going back and trying to find out the what, when, where, and why’s of these sites.

The hub for them, is here, a subdirectory of the main site. As the sluthing continues, and the emails roll back in, I’m updating it with the backgrounds of these sites. 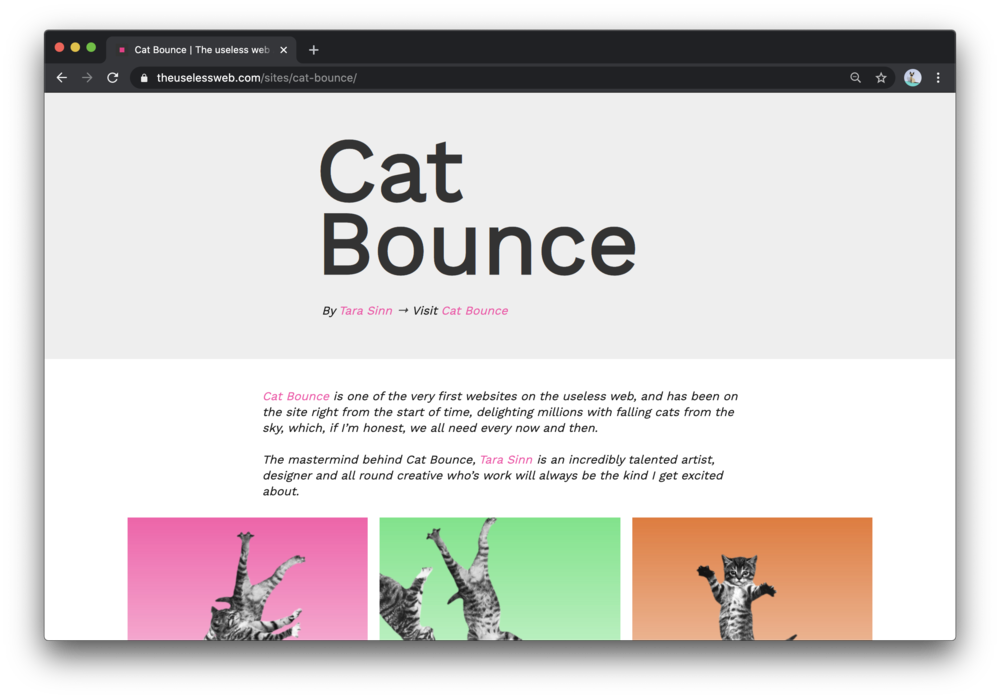 To kick things off, we have Cat Bounce, Endless Horse & RRRGGGBBB. 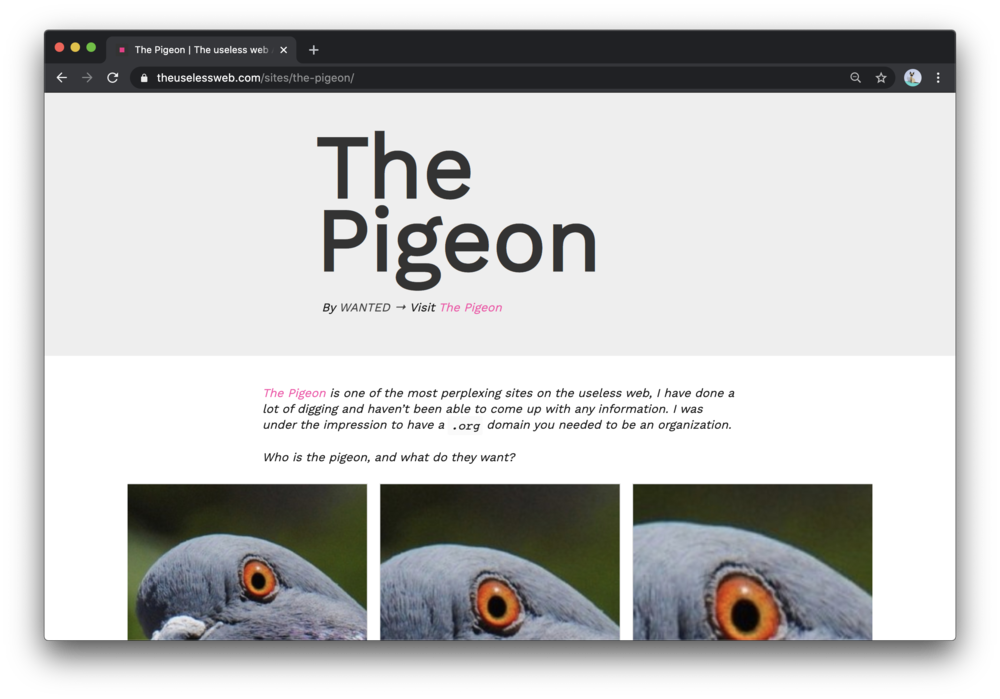 I’m also using the service to try to appeal to anyone reading, I’m seeking out any information on sites are very difficult to find information about, The Pigeon for example. 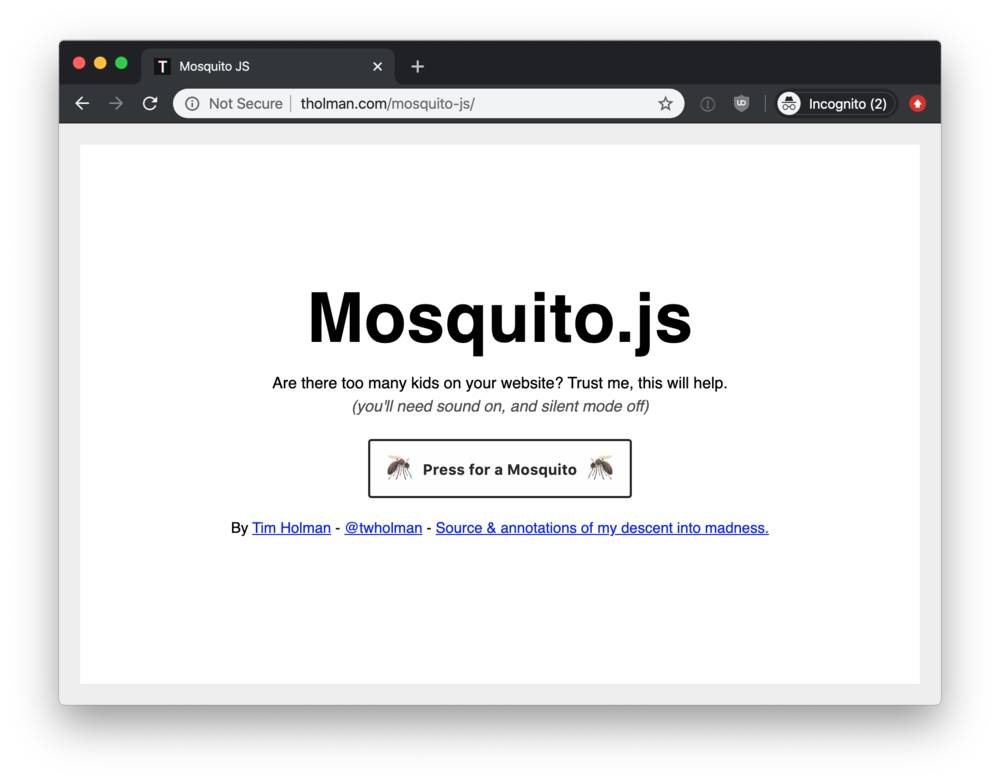 Always Judge a Book by it's Cover

A weekend project that took a a couple of weekends. Weird books & weird covers.

I’ve had this project in my brain for over a year, and was really waiting for a gap when I had the time and patience to complete it.

Always Judge a Book by its Cover is a collection of all the strangest book titles out there, as well as their amazon links, and a small parody-styled review of the book based on its cover. 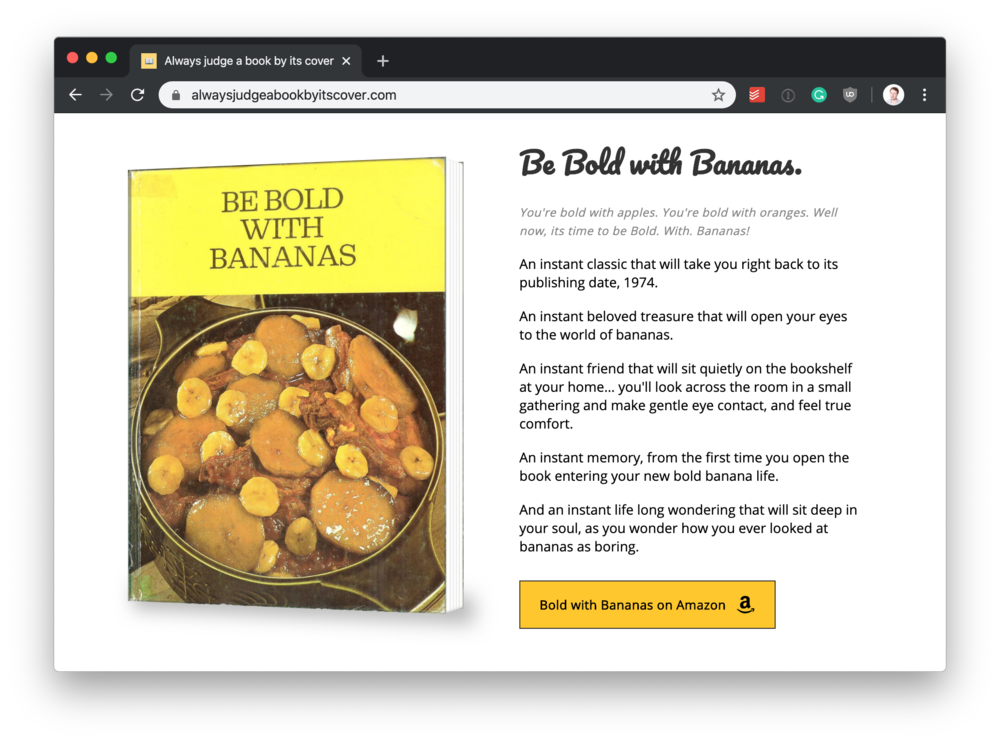 The real time suck of this was finding all the books, writing all the reviews, collecting all the links, and then building the site itself. 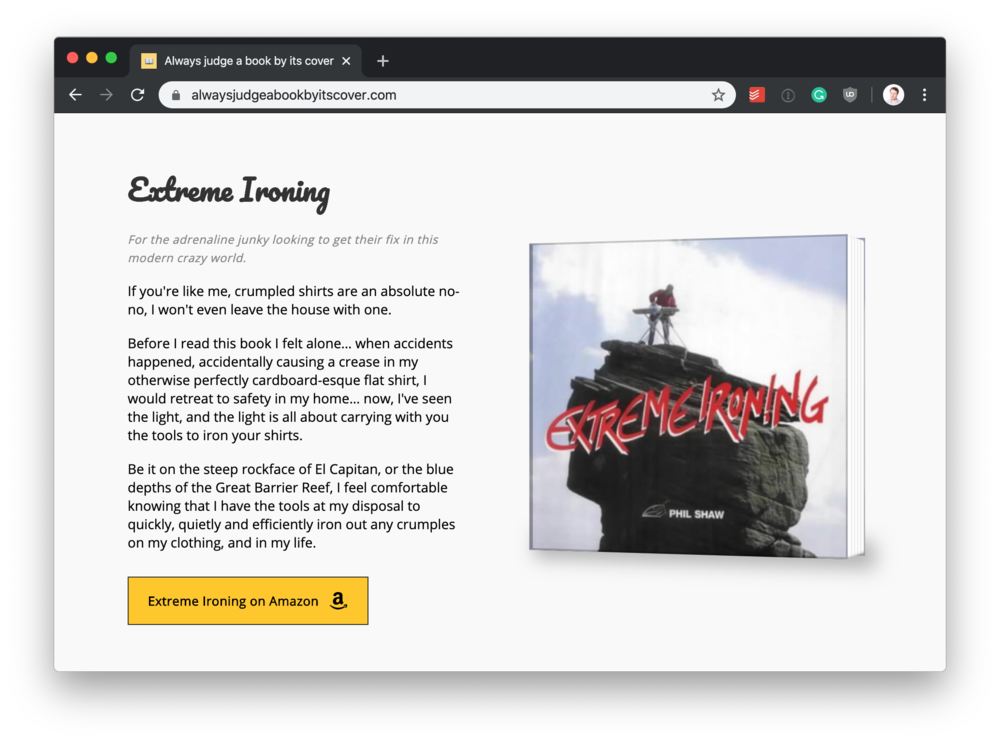 There are some nice little touches that were fun to build on this project. The drippig effect was done with canvas (could probably be nicer with css houdini in the future.)

The 3d book effects were done with css transforms, and are hooked up to lazy load with the js intersection observer.

➶ Always Judge a Book by its Cover

I’ve remade inspiring online, with a focus on a slightly longer format.

I’d first made inspiring online in late 2016, and had kept it fairly busy into 2018, and then dropped off completely.

I’ve decided to do a revival, with a little longer format of the posts. Partially because I’ve been putting a little more effort into writing, and trying to improve on it, and partially because I feel that I have the knowledge to give some fun insights into some of these things.

The refresh also has come with a fresh redesign, to accommodate the longer format of writing. 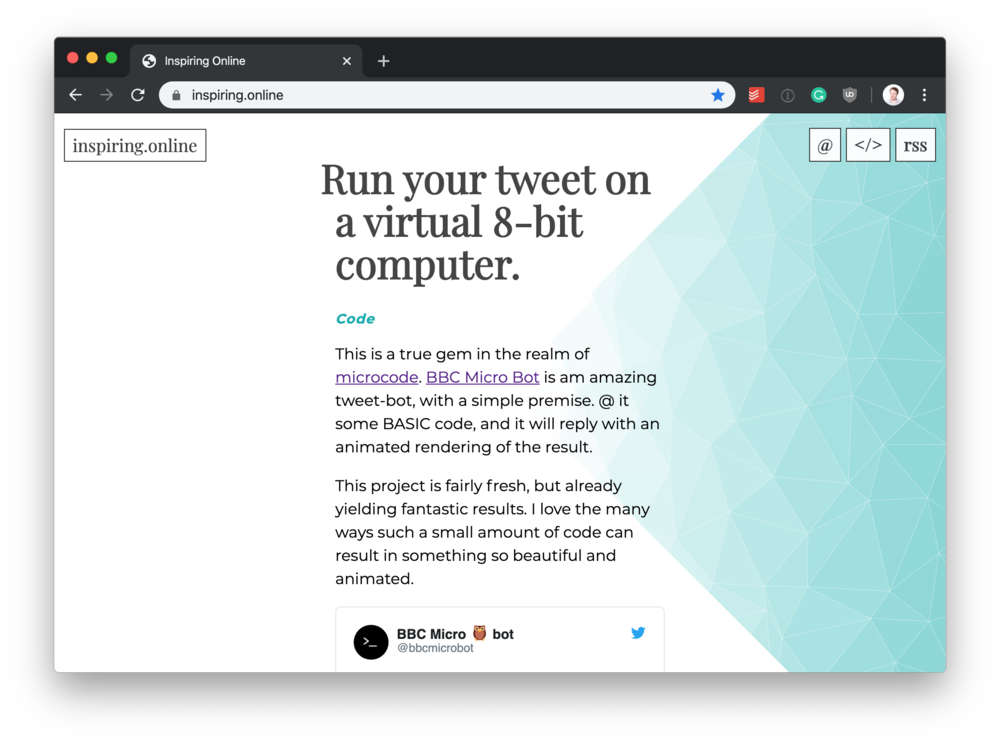 I’ve rebuilt the code from scratch, moving it from jekyll to hugo, which is a lot faster. And hosted it on Netlify, for quick and easy deployment.

Edit: After this initial rebrand, I’ve done a larger, weirder one. Inspiring Online is now The Indie Web.

A podcast about generative art, to go with the interactive tutorials!

Last year, Ruth reached out to me and proposed the idea of a generative art podcast!

We mulled over the idea for a few months, and then put together a format that we thought would be fun for us to create, as well as educational and inspiring for others.

We’ve got some great guests coming on.

As well as some short chats, where we kind of completely got off-topic and found the chat interesting enough to publish.

We’ve combined the podcast into the generative artistry site, so you can get all your tutorials and blog posts in the same place.

The podcast is available in all the cool places too!

A little music player, with a binary twist.

A while ago, I stumbled onto this beautiful video. A music player that counted up with binary, playing notes on each particular 1, and being silent on each particular 0. In the video (which I do think everyone should listen to!) the creator has also added some background sounds, and is also using real piano notes, so it is definitely a lot more beautiful.

That said, it was still something that I wanted to replicate on the web, using Tone.JS.

I also went ahead and added the ability to customize the notes, and share the individual creations with others via url parameters. 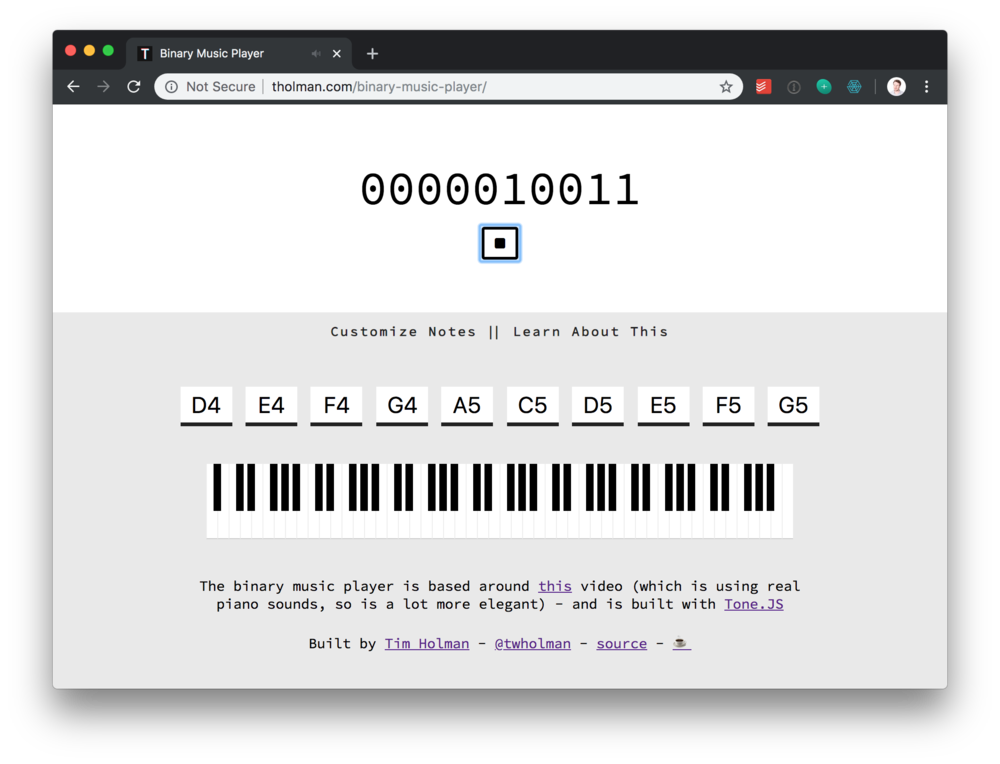 There wasn’t really any need to use a framework (other than Tone.JS of course), so its all relatively vanilla JavaScript, so if you take a peek at the code, it shouldn’t be too insane.